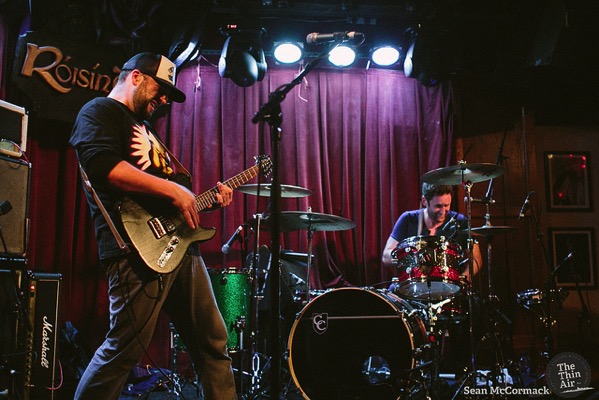 Giveamanakick are back on the road again. Celebrating the 10th anniversary of their 2nd album ‘We are the Way Forward’, the duo put on a fantastic performance in Roisin Dubh this week with a good crowd in attendance. Support was from Naive Ted (AKA Deviant). Full set of images are online at: Giveamanackick @ The Thin Air

Photo info: As with most of the gigs I shoot in Roisin Dubh, I’m using a set of fast primes and high ISO to capture the show. Recently I’ve been using the Fuji X-T10 for everything, but as I was heading straight to Carbon after, I went with the Canon 5DIII instead. I used 3 lenses for this: the 28mm f1.8, the 50mm f1.4 and the 85mm f1.8. This allows a variety of looks. That said I’ve been using the 28mm and leaning in close to get different looks recently rather than using them ‘properly’. For ISO I’m running ISO3200, f2 and 1/80 on average. My thinking: Stopped down from maximum aperture for increased lens sharpness. Shutter speed fast enough to freeze average motion-you’re not going to freeze head banging with this speed though. ISO is set to allow these. While ISO3200 will add noise, it’s acceptable for type of shoot.