As a fashion, portrait and beauty photographer here in Galway, I do both studio and location shoots. My studio lights, and my high power battery flashes are made by Elinchrom, so I can mix and match my modifiers between them for consistency in my lighting choice. Even though the Rangers are relatively lightweight for their power, you can’t just leave them in the bag in case of a job. In these case I prefer to use speedlights. I’ve mentioned the Neweer rebranded Godox flashes before, but I’ve also gone with a Godox V860C TTL flash. This is now my main speedlight for both TTL and Manual usage. I really only use TTL for my club event photography, and for occasional on camera bounce flash work.

I do have a range of modifiers for speedlights, which I’ll discuss in the future (including the awesome MagMod stuff), but by and large they don’t meet the standard of the studio modifiers. One of my favourite modifiers is my Deep Octa 70. It’s just so versatile. I’ve blogged about this before when talking about ‘Shooting with 4 lights‘. It packs down enough for a suitcase for travel, but not quite Ryanair size. For my upcoming talk on speedlights at the SWPP Convention, I have a suitcase so I may bring this.. because I have a way to use it with my Godox. 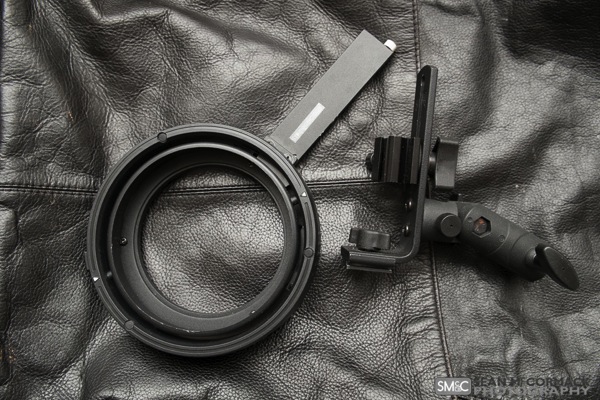 There’s a really common bracket that used with loads of speed light softboxes, and some genius has modified one to hold Elinchrom modifiers. I’ve actually had my one a while from eBay (here’s a sample one; I’ve not bought from them), but I was really busy so never got to even test it. I’ve been using the Lastolite 36″ Triplefold Umbrella, and an Ebay 120cm Octa recently, but really wanted the look of the Deep Octa. One thing I’ve noticed with the 120cm Octa (it’s a reverse Octa-so the flash faces into it), is that the best light comes when I use the Wide Angle Diffuser (WAD) on the flash. With the Godox, that’s a 14mm zoom; Really wide.

So I mounted the Godox on the bracket, and then mounted the whole lot to the Deep Octa. It’s easier doing it this way than trying to mount the Deep Octa onto the bracket. Trust me, you’ll look far more clever on the job if you do. The flash is really secure because you have both the flash screw and the coldshoe screw to hold it in place. That’s the beauty of having the trigger mount to the side of the flash. 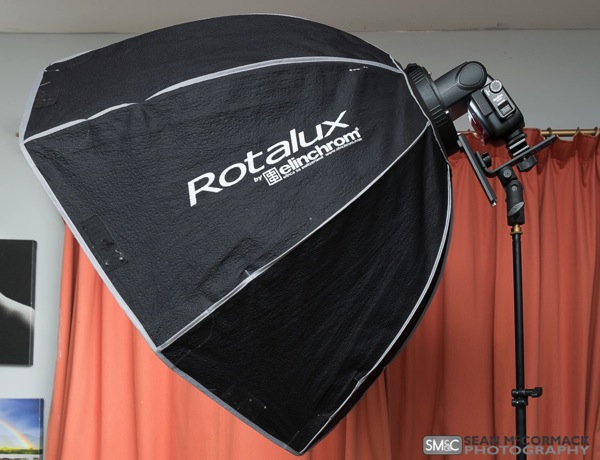 Next is the test to see what works best for spread. I set Fuji XPro-1 & Godox up to render expose the interior of the Octa. I shot 2 shots, one with the flash at 24mm, with the WAD off, and the other at 14mm with the WAD on.

We can see the most even light is from the 14mm. I could use a Stofen style cap to diffuse more, but that requires additional power from the flash. Not as much of an issue with the Godox with it’s 650 full power flashes per battery, but still one to consider.

I did shoot some test shots with my wife, but needless to say, they’re not going up here; late night shots are not for publication. Still they came out well and I’m looking forward to using this in upcoming location shoots. Here’s the Deep Octa in action with the Quadra on location