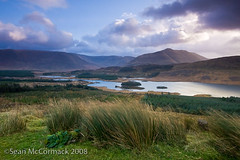 In what was originally a recce, Paul Feeney and I went up into deepest Mayo for a location Paul had seen once in the fading light of day. Much better in daylight, I must say! Click the image for a larger version on Flicker.
As I was waiting on the light firing off test shots, my battery died. “No problem” I thought, “I have a spare”. I’d taken a battery off the charger on the way out, so I put it in the camera. I figures that seeing as the winds was strong and the clouds really moving, this would be a great chance for a nice timelapse. So I set the camera up and pulled out my Canon TC80N intervalometer and set it to 5 sec intervals. 80 shots (small JPEG, I might add) later, the fresh battery is completely dead. A full fresh battery with no flash can to 1000 shots, so I was annoyed, but there was nothing I could do.
Anyhow at 24fps, the final 75 shots take a whopping 3 seconds to view, rather that the 30 mins compressed to 15 secs I had intended. Clicking through to Vimeo will allow you to view a HD version.

Tawnyard from Sean McCormack on Vimeo.